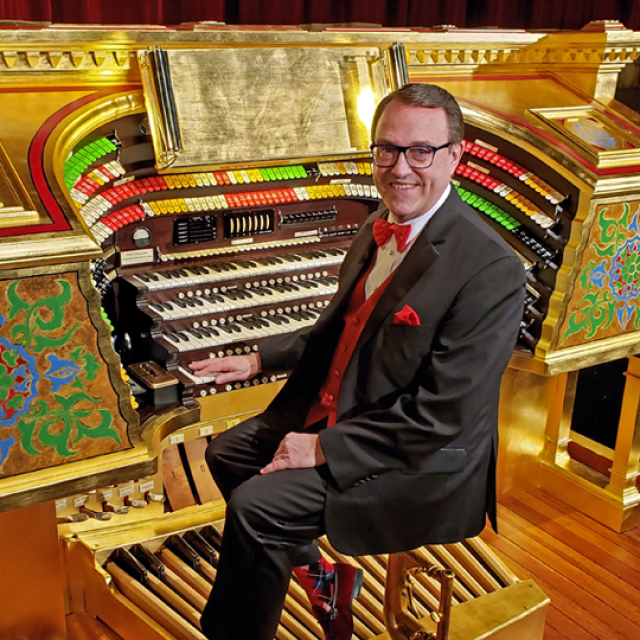 Please Note: Due to unforeseen circumstances, Walt Strony will no longer be performing and has been replaced by Ken Double.

A former radio and television sportscaster who started taking organ lessons as an 8-year-old in Chicago, KEN DOUBLE enjoyed a 33-year career as a sportscaster, and now a second career focused on his love of the music of the theatre pipe organ.

As a sportscaster, Ken broadcast NBA and major college basketball, NHL, IHL and AHL hockey, the worldwide radio broadcast of the Indy 500, and more.

But since retiring from sports in 2008, Ken has performed concerts on the great theatre pipe organs around the world.  He also helped establish the Long Center Theatre Organ Society in Lafayette, Indiana; spent ten years as the President of the American Theatre Organ Society; and worked on fundraising for the Historic Organ Restoration Committee, the organization restoring the largest musical instrument in the world, the Midmer-Losh organ at Boardwalk Hall in Atlantic City, NJ.  All this in addition to his consulting and performing work at the Atlanta Fox on the beloved “Might Mo” Moller theatre pipe organ.

Ken Double performed his first concert in 1978; has more than 20 recordings to his credit; has done eight tours of Australia and New Zealand; just completed his 40th annual concert at the Long Center in Lafayette, IN; will play the 25th anniversary concert at the Barton at the Warren Center in Indianapolis; and has been the Master of Ceremonies for more than 25 ATOS annual and regional conventions.

Ken has had the privilege of performing for the Theatre Organ Society of San Diego several times at the great Wurlitzer at Trinity Church including an appearance just last April, and is delighted to perform his first public concert on the great Robert-Morton organ at the beautiful Balboa Theatre.

Broadcaster, concert organist, entertainer, promoter, fundraiser – Ken has worn many hats during his professional careers, and has been fortunate to, as he likes to say, “Get paid to have fun.”  As the song goes, nice work if you can get it!