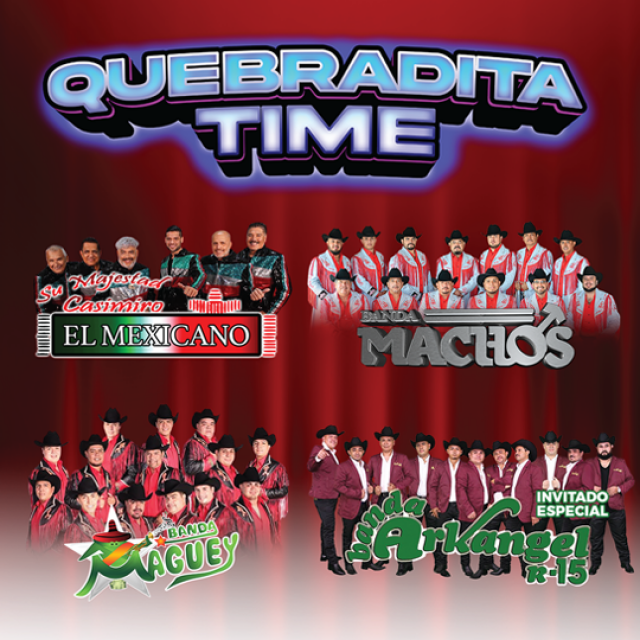 Venue
Civic Theatre
Pricing
Tickets start at $55 (includes a $3.50 Facility Restoration Fee)
Run Time
TBA
Children
Must be 6+ years to attend. All ages must have own ticket.
On Sale
Public on Sale begins Mon, Sep 27, 2021 @ 12:00P

Known for their iconic music, Mi Banda El Mexicano, are quickly becoming viral music sensations.  The band not only performs regional Mexican music but rock and jazz as well. With over 47 years of history, they have received over 25 gold albums and many awards & nominations.

Banda Machos hails from Jalisco, Mexico, and has a career spanning over 24 years with 24 albums made, plus multiple awards and nominations. Banda Machos is an iconic band that has performed internationally and across the US, including stops at the Los Angeles Memorial Coliseum and Madison Square Garden in New York.

Banda Maguey "La estrella de los bailes" is a musical group from Jalisco, Mexico. They originated in Villa Corona, also home to Banda Machos, who along with Banda Maguey have been called the two most successful exponents of the "technobanda" sound. During the 1990’s, Banda Maguey dominated the radio waves with the debut of their album Tumbando Caña, which contained a number of hits including "El Alacran" a cover originally sung by La Sonora Matancera. In 1995, Banda Maguey released La Estrella De Los Bailes, which featured hit singles “Como La Luna,” “Si Tú No Estás,” “Que Sacrificio,” and “Eva Maria” that climbed local charts.

This event is subject to existing State of California, County, and City Health Mandates regarding venue capacity and safety protocols for implementing safety in response to the COVID-19 pandemic.